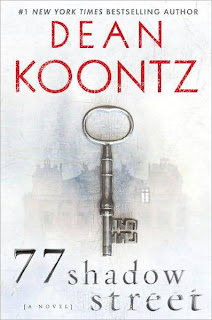 Summary:
Welcome to the Pendleton. Built as a tycoon’s dream home in the 1880s and converted to luxury condominiums not quite a century later, the Gilded Age palace at the summit of Shadow Hill is a sanctuary for its fortunate residents. Scant traces remain of the episodes of madness, suicide, mass murder—and whispers of things far worse—that have scarred its grandeur almost from the beginning.
But now inexplicable shadows caper across walls, security cameras relay impossible images, phantom voices mutter in strange tongues, not-quite-human figures lurk in the basement, elevators plunge into unknown depths. With each passing hour a terrifying certainty grows: Whatever drove the Pendleton’s past occupants to their unspeakable fates is at work again. And as nightmare visions become real, as a deadly tide begins to engulf them, the people at 77 Shadow Street will find the key to humanity’s future . . . if they can survive to use it.

Review:
One Word: Awful
I was going to do the first reviews on the H.P. Mallory books but figured I should just get this one out of the way. I never thought I would have to say this about a Dean Koontz book but here it goes...This book Sucked there is just no other word to use. I am a huge Koontz fan and have read every book that he has written. The second a Koontz book hits the shelves it's in my hands. I was so excited to read this book and in the end I couldn't even finish it. Koontz has a talent for making a reader feel as if they are part of the world the book is set in, but this one had way too much description and far to many things and characters to keep track of. I tried so hard to finish this book hoping the end would justify the mind numbing effects this book had on me. The One is this omnipresent being that I could never quite grasp, and Witness a part plant, part robot, part human is just out there! There were present characters and past characters abound they were all over the place. There were so many characters that you couldn't focus one any one long enough to really care about what happened to any particular one. I read many reviews for this book before I read it and I should have heeded the warnings. The characters are very separate throughout the book so there is very little said between the plethora of characters that the reader is assaulted with. It is basically a haunted house book that could have been so much better if there wasn't so much to keep track of. I started to feel like I should be taking notes about which character was facing which challenge at the time. Many different types of "monsters" lurked about challenging the characters, each character had there own different kind. There were also many sentences that were just left unfinished. All in all I won't be recommending this book to anyone and it will stand out as one of the worst books I have ever read. Sorry but this is my first one monkey review!

Book Trailer: Warning! This trailer is much more interesting than the book!