Something Witchy This Way Comes 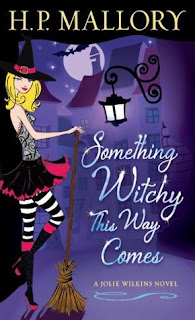 Summary:
A witch’s work is never done, and in bestselling author H. P. Mallory’s mesmerizing new novel, Jolie Wilkins finds that the real magic is only just beginning.
For smart and sexy witch Jolie Wilkins, being Queen of the Underworld is a royal pain. Back from a round of time travel, Jolie must now protect her realm from the sinister Lurkers—a powerful breed of half-humans bent on conquering the undead. And if there’s one thing she knows, it’s that the supernatural never go down without a fight.
At least Jolie has her soul mate (and finally official boyfriend), warlock Rand Balfour, by her side. Honorable, brave, and unbelievably handsome, Rand is everything Jolie wants in a man. So why can’t she forget the dangerously alluring vampire, Sinjin Sinclair? With her private life heating up and a battle boiling over, Jolie sets out to prove that in matters of love and war, the fairer hex has its own set of charms.

Review:
I really hate to sound redundant but I really do love these books, the same gushing will be seen when I review the Dulce O'Neal books. I love H.P.'S writing! That being said the last book in this series gave us a little something naughty while this books had my stomach in knots hoping Jolie would be ok. The Lurkers get a hold of Jolie and we learn a few new things about her (like everything we have been wondering) and get a few nice Rand scenes. And of course Sinjin makes his appearance just as breath taking as usual, lets face it I'm team Rand just so it could free up Sinjin for me (not that I think he's real but hey it's nice to fantasize). All of the new details that fill in the blanks that have been there from the beginning are very welcome after having to wonder through 4 other books just what Jolie was. This book just like the one before it didn't disappoint. We get a few shockers and a few duh's and even a alright finally! These books make for a quick, upbeat, delightful read, so if your into that kind of thing or just want to break away from the usual YA drama and hard core mind twisters pick this series up or just continue loving the series with me.
Pages: 336
Author Website: http://hpmallory.com/
Amazon link: http://www.amazon.com/dp/0345531582
No book trailer for this one but here is another Jolie parody
* remember Jolie is not this ditsy or annoying!
Monkey's Given